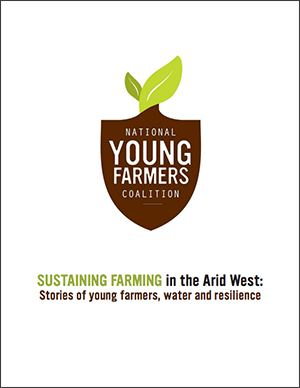 “All too often, water is taken off the land for growing cities at the expense of agriculture, the health of the land and the economic vitality of rural communities,” said Kate Greenberg, Western Organizer for the National Young Farmers Coalition. “Irrigated agriculture is central to our communities in the Southwest. We need to keep it productive, vibrant and viable for today and the generations ahead while responding to existing and future pressures on our limited water supply. We all have a shared responsibility to protect this critical resource, and these farmers are helping lead the way.”

Highlights from the report, which profiles farmers from Arizona, Colorado, New Mexico and Utah, include:

The Colorado River is one of the most dammed, diverted and in-demand rivers in the world. From its headwaters in the Rockies to its dry Delta, the Colorado travels through seven states, two countries and brings water to over 36 million people. In addition, it provides irrigation for nearly one fifth of our nation’s produce, including 80% of winter vegetables. Now entering its 14th year of drought, residents of the Colorado River Basin face challenging questions of what kind of West we want and can sustain.

The agriculture industry is the largest user of water in the West, consuming over 70% of surface water. As precipitation patterns shift, climate trends lean toward hotter, drier times, and cities continue to grow, many are looking to farmland for new supplies of water.
But taking agriculture out of the West is not the answer. Alternatives to what is known as “buy-and-dry,” or buying water from agriculture, which leaves the land unproductive, exist. These alternatives promote a vibrant agricultural economy and land that is being made better for the next generation of farmers and ranchers who grow our food.

It is a Herculean achievement that farmers and ranchers are able to save water while enhancing productivity in a period of unprecedented drought. As stewards making a life and a living off the land, these producers are exploring solutions to some of the most daunting challenges facing the Colorado River Basin and the West as a whole. It is time we work together as farmers and ranchers lead in the innovation and stewardship of the Wests’ most valuable resources.